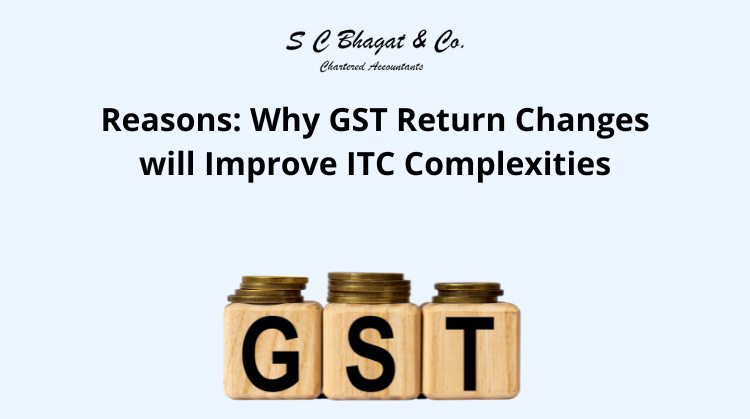 India’s GST law would have been executed in India through the narrative of national ambition. To ease the whole GST (Goods and Service Tax) framework for India Inc, the government is enduring a lot via revising the reporting method to make the GST a Good and direct tax. For non-compliant assesses only, would be asked or obliged the diligent ones wouldn’t get affected.

One such modification will be reported to the government via Notification No. 14/2022 – Central Tax dated July 5, 2022 in Table 4 GSTR 3B meant for Input Tax Credits (ITC) related information. The mentioned revisions will be available on the GST portal from September 1, 2022. These aspects have been updated by the government:

Reporting reversals in ITC within the GST provisions required the above mentioned modification. But the modifications would not comply effectively via assessees, and merely eligible ITC or ITC available and ITC reversed would be fetched in GSTR 3B. These amendments shall draw transparency in reporting via the assessee and shall support the investigators in reconciling the numbers of GSTR 3B with the books with the effective tax administration.

The government has some specific goals behind making the same revisions, such as (a) to autopopulate and correlate the data of GSTR3B with GSTR 2B, and that of GSTR9 with GSTR 3B; and (b) to secure constancy in practice comply in reporting ineligible ITC and various reversals of ITC in GSTR 3B. But the same surged the complexity in GSTR 3B filing, which was considered the summary return during its execution. Based upon our conversations with clients at different levels and our experience in helping them with their regular compliance, these are some of the issues that to these modifications below:

ITC Not Accountable Separately Under Section 17(5)
In most companies, the process of accounting for vendor invoices would be structured so that the GST amount, which does not qualify for ITC, does not get recorded separately; Instead, the entire transaction amount would be blocked by the expense GL. It would be difficult to obtain the report for the ineligible ITC books if the transaction amount was not blocked by the expense GL. The company has been reorganized and must set the system to the new operation. A separate GL/report is required for the ineligible ITC. However, it is not allowed to engage in too many configurations in their respective ERP systems or their AP processes. This is because both takes time and is costly.

Annual Summary of Reversals Under Rule 42 Under Rule 42,
sub-rule (2) furnishes for the recalculation of the ITC reversal based on the exempted supplies on the grounds of the finish of the year the turnover of The assessee must either reverse the ITC shortage not modified before, or claim the ITC surplus in the monthly returns for the entire fiscal year. The method might not allow for the absolute reversals under rule 42. In this case, the assessee may need to claim that amount in the future. It appears that the government did not consider the same provision or describe the procedure to adjust it. Transparency is being anticipated. Identical that, if there is any unintentional mistake in reporting data in Table 4(B)(1), there is no process for correcting that.

Need to Consolidate All Transactions of GSTR2B, Ineligible ITC
Under the clarification issued, vide Circular No. 170/02/2022 – GST July 6, 2022. It has been proven that an assessee would need to notify the data listed in Table 4(A), which is auto-populated in GSTR2B of the specified month. This will allow you to reconcile all line items from GSTR 2B with the ineligible ITC, and negotiate with your month’s purchase register. The same would be crucial for being able to report the correct details in Table 4(B) as per the ITC reversals and to assure that the “Net ITC taken” The amount in Table 4 (C) is equal to the ITC amount as per the record. This will increase the compliance burden on the assessee, especially for the companies.

Notices from the Tax Department regarding ITC Reconciliation do Not Consider Reversals [Table 4,(B)].
Notices are being sent to taxpayers by the tax department due to friction between the ITC claim amount for GSTR 3B and their respective GSTR 2A/2B. The most striking observation from notices sent to several states is that the council doesn’t acknowledge the amount of reversals made by the assessee. in Table 4(B), along with the amount of GSTR 2A/2B recognized would vary from the amounts which have been available on the GST portal.