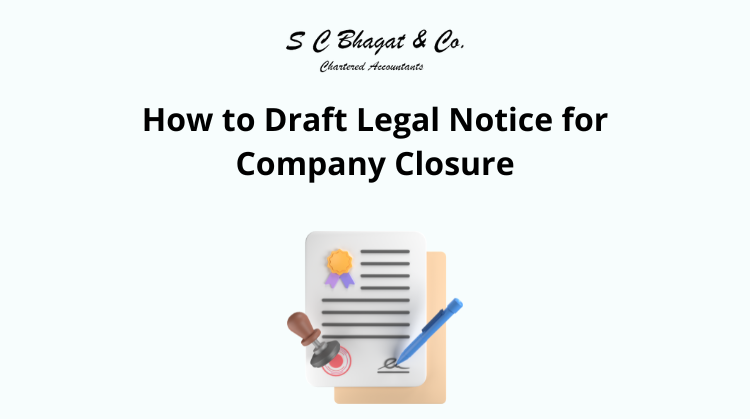 Are you thinking of your company closure? Read to know the legal formalities of  how to Draft Legal Notice for Company Closure.

The process of closing a company is the procedure of bringing the company’s life in a way to an end. During the winding-up procedure, the firm’s assets are managed to benefit its creditors and members. A company’s closing procedure may be initiated at the discretion of shareholders or forced through a Tribunal or court by delivering a legal Notice. Let’s look at it more closely.

How Does a Company Close?
The liquidation of company’s assets, which are liquidated in order to pay its debts is called closing a business. When a business is going to close, the liabilities, expenses, and charges are settled first. Then the remainder of the assets are divided among shareholders. This that is the process of closing a business is about.

The Company Is Officially Dissolved and Ceases to Exist after Liquidating it
The legal procedure of winding down a business and ceasing operations is referred to as winding up. It ends after it is wound up, and the assets are managed to avoid any harm to the stakeholders.

The company’s shareholders can initiate the closure at any time by giving legal Notice. After the debts have been settled, all of the company’s bank accounts must be closed. In the event of a company’s closure, the GST registration must also be surrendered.

The application petition can be filed with the Ministry of Corporate Affairs once all registrations have been relinquished. In general, the The company can be wound up by one of two methods:

Legal Notice for Company Closure
A company is closed when a tribunal or court orders it to be wound up after it has been formed and established by the ordinance. The Tribunal can dissolve a business in certain circumstances. Compulsory closure is only feasible in the following cases, according to the Companies Act of 2013:

People who are eligible to file an Application with the Tribunal A petition to request the closing of a company is required to be filed. the following persons are able to file an application:

Actions Taken by the Tribunal Upon Receipt of the Petition
The Companies Act of 2013 further clarifies the steps that is the Tribunal will take after the request for the closure of the company is accepted.

The Tribunal would issue one of the following orders after receiving the Petition:

Conclusion
A company ends for various reasons, but it is more complex than shutting the door to its offices or failing to show up for work. The procedure of closing is far more time-consuming than the organization itself.