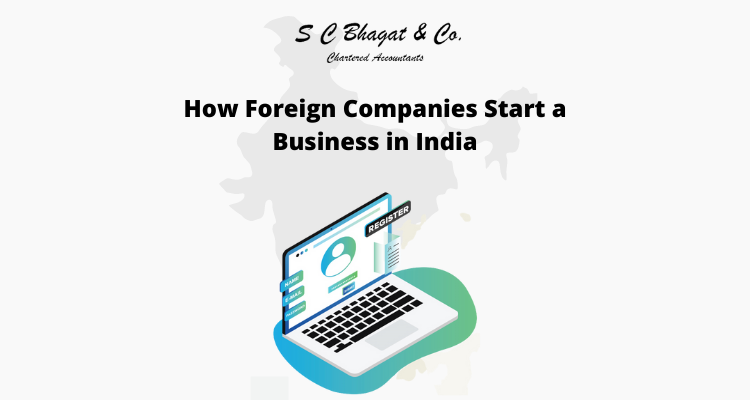 As India is developing country and that too one of the fastest developing country in world, it is normal that other countries wanted to invest in India. India is actually a hub doing business as the cost of production in India is low which ultimately increases the Demand curve of a product or service.

What is Foreign Company?

As per section 2(42) of the Companies Act, 2013, a foreign company means any company or body corporate incorporated outside India which:-

(a) has a place of business in India whether by itself or through an agent, physically or through electronic mode; and

(b) conducts any business activity in India in any other manner.

What are ways that a foreign company can run business in India?

A foreign company which is desirous of entering and doing business in India can enter in any of below given ways:-

As an Indian Company:- A Indian Limited company is incorporated in India and the shares are held by foreigners in below given ways.

As an Foreign Company:- A foreign company get register under the Companies Act, 2013 to start business in any of below given ways:-

Starting a private limited company is the coolest and fastest way to set up in India. Foreign Direct Investment (FDI) of up to 100% into a public limited or private limited is permitted under the FDI policy.

A foreign company doing business in India can also close down its business alike an Indian company. However, its process is little varies.

A wholly owned company or subsidiary can go for winding up or striking of the name of the company from the register of companies as per the Companies Act, 2013 as well as Reserve Bank of India.

Once ROC closure has taken place, the application for winding up/closure of Liaison Office may be submitted along with the following documents with designated AD Category – I bank:

Copy of the Reserve Bank’s approval for establishing the LO.

Auditor’s certificate : Along with a statement of assets and liabilities of the applicant and indicating the manner of disposal of assets and the manner how the remittable amount has been generated;

Confirming that all liabilities in India including arrears of gratuity and other benefits to employees, etc. of the office have been fulfilled.

Confirming that no income accruing from sources outside India (including proceeds of exports) has remained un-repatriated to India.

Confirmation from the applicant/parent company that no legal proceedings in any Court in India are pending against the LO.

A report from the Registrar of Companies (ROC) regarding compliance with the provisions of the Companies Act, 2013.

The designated AD Category – I banks will confirm that the LO had done their respective compliances.

Any other document/s, required by Reserve Bank of India/AD Category-I bank while granting approval.