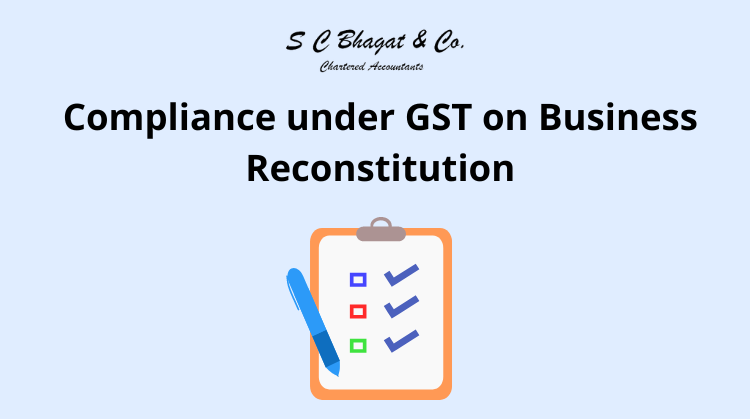 In case of transactions of amalgamation or merger, one needs to take note of the fact that there are two different dates, namely, the effective date from which the scheme would be given effect (which has to be indicated while applying the amalgamation or merger as filed before NCLT) and, second, the date of order, when the Court or NCLT approves the scheme. Generally, the effective date precedes the order date under the Income Tax Act. In contrast, till the order is received, parties to the amalgamation/merger proceedings continue to have a separate existence; the receipt of the order requires them to re-file their ITR as the company(s) which has merged or amalgamated into the other company has ceased to exist.

However, it is not so under the GST regime. Section 87(2) specifically provides that the parties to the scheme shall continue to be treated as distinct legal entities till the date or receipt of the order, and the registration certificate of the amalgamated or merged company shall be canceled only with effect from the date of the order approving the scheme by the Court /NCLT. The relevant portion of section 87.2 is reproduced below:-

This means, thereby, till the date of the order approving the scheme is received, each of the companies party to the system shall continue to comply with the various provisions of the law, including the filing of periodic tax returns, annual returns, and reconciliation statements prescribed u/s 35.
Similarly, section 22(4) provides that – Notwithstanding anything contained in sub-section(1) and (3) in a case of transfer under the sanction of the scheme or an arrangement for amalgamation or, as the case may be, the demerger of two or more companies under an order of a High Court, Tribunal or otherwise, the transferee shall be liable to be registered, with effect from the date on which the Registrar of Companies issues a certificate of incorporation giving effect to such order of the High Court or Tribunal.

Therefore, any new company which comes into existence in pursuance of an order of a Court or NCLT, as the case may be, shall be liable to get registered with effect from the date on which the Registrar of Companies issues a certificate of incorporation giving effect to such order.