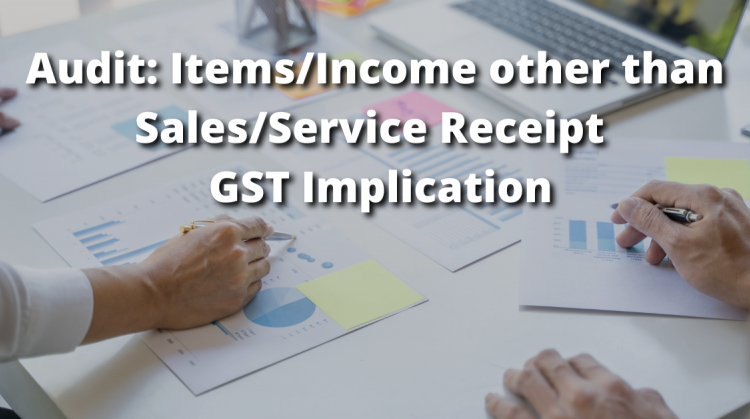 There are many items which has different treatment in Income tax v/s treatment under GST Laws. So while auditing we should careful about the same.

As per charging section of GST act, GST shall be levied on supplies of goods or services or both, except on the supply of alcoholic liquor for human consumption. Supply defined in Section 7 of CGST which briefly states that “Supply includes all forms of supply of goods or services or both such as sale, transfer, barter, exchange, license, rental, lease or disposal made or agreed to be made for a consideration by a person in the course or furtherance of business”.

So while checking whether any receipt is liable to GST or not, we need to check whether it shall be considered as supply as per GST act or not. If yes, then we need to pay GST as per GST laws on it.

Following are the most common items which need to be considered:

3. Income from Partnership Firm of Any Individual Registered under GST:

5. Dividend Income from shares and Capital Gain/Loss on sale of shares/Debentures/MFs:Securities are excluded from good/services in GST Act. GST Act refers the same meaning of securities as defined in Securities Contracts (Regulation) Act, 1956 which includes shares, scrips, stocks, bonds, derivative instruments etc. So any income either Dividend/Capital Gain/Loss from securities is not covered in supply. Hence not subject to GST act.

8. Any Charges or fee collection from customer: These amount is to be considered as part of consideration of supplies made to customer or considered as separate supply so in both the cases, we need to charge the GST on it.

10. Sale of Fixed Assets:It is liable to GST as per the nature of Fixed assets. The calculation of amount of taxable value is also different from what we take in Income tax act.